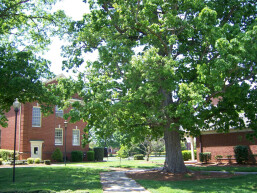 THE JOHN BAIN CANE AND THE JULIA CAMPBELL BLACK CANE

In 1889 a gold headed walking stick was given to Mr. John Bain by members of Philadelphia Church and the community to express their gratitude. It was carried proudly by its owner for seven years.  Mr. Bain willed this gift to Philadelphia Presbyterian Church with the stipulation it be carried by the oldest male member. And so it has. A committee appointed by the Session arranged for a gold band to be placed under the head of the cane so that the names of its custodians could be engraved on it with the years they held it. The John Bain Cane is carried today by James H. Black, the oldest male member of the congregation.

The Julia Campbell Black cane was crafted in 1976 by S. Pernay Ross, from a wild cherry tree and given to Julia Campbell Black from her son. She carried the cane till she was 101 years old.  Since Mrs. Black's death in 1979 the cane has been carried by the oldest female member of the congregation.  The Julie Black Cane is carried today by Cora Lee Lonon. 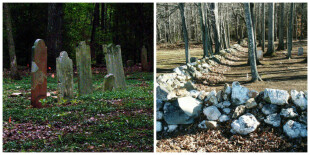 The cemetery is located at the original site of Clear Creek Presbyterian Church (now called Philadelphia Presbyterian Church), along Brief Road, Mint Hill, Mecklenburg County, NC. The approximately one acre site was designated as Rocky Spring Meeting House Meeting House Burial Ground in a deed given to the church in 1788. A moat with a rock wall laid against it marks the cemetery. It appears to be filled with graves though only 24 are marked with full headstones with names. An additional three are marked have initials carved on field stones. More than one hundred are simply marked with field stones with no initials or dates. Pine slab markers were likely used for many graves. The oldest marked burial found is on a field stone with the carving M W 1774. The oldest original professionally carved grave marker is that of Elizabeth Robb 1792.

Three signers of the Mecklenburg Declaration of Independence, Col. Adam Alexander, John Foard, and John Query, are thought to be buried in this cemetery. Of these three signers, Col. Adam Alexander's grave is only marked grave that has been located. John Foard's grave is thought to be with the Morris plot since his daughter Elizabeth married William Morris. Both William and Elizabeth [Foard] Morris markers are in the Morris plot. The grave of the third signer, John Query (d.1797), is thought to be near the Robert Query (d.1827) marker. The cemetery is located approximately 500 feet from Brief Road and located directly across from a mailbox that reads 8730. While the church has a deed to the cemetery, the access driveway leading to it is private.

Philadelphia Presbyterian Church, originally know as Clear Creek Presbyterian Church, was established at this location in 1770 in the Rocky Spring Meeting House. This log meeting house burned in 1780 and the church decided to rebuild about two miles away at the second site along what is now the Matthews-Mint Hill Road (NC-51). The Cemetery at the Second Site of Philadelphia Presbyterian Church marks the location of the second church building site, where the church was located for 46 years until moving to the third and present site at 11501 Bain School Road in 1826. Three cemeteries are at the present and third site of the church and information on these cemeteries is not included with this page.